Adventures of Potli Baba by Nabila Tazyeen is licensed under a Creative Commons Attribution-NoDerivs 3.0 Unported License.
Join 285 other subscribers

Latest on the blog.

Skip to content
Press Enter / Return to begin your search.

Ever since I can remember, the mere mention of Rajasthan has brought a look of wide-eyed wonder to my face. The royal (and ghostly) palaces, the filigree windows, the food, desert safari, Pushkar – there wasn’t a single element that didn’t fascinate me. Having lusted after it for years, I finally managed to spend two days in Jaipur. It worked wonderfully well as an appetizer, making my wandering feet thirst for a longer, more detailed exploration of the city and its cousins in the near future.

I love Jaipur for its vibrancy, bustle (especially since we went just a few days before Diwali), food, architecture and salesmen. But what I love most are its colours – of streets, people, places, clothes, just about everything. If I could paint the world with it, I would; but I’ll restrict that to this blog for now.

The train ride from Delhi to Jaipur is a lovely one because the landscape changes from concrete-buildings to sun-kissed fields to patches of barren land and mountains with fort walls visible in the distance.

The designs true to Jaipur are available in every store, and sometimes within easy grasp on the roads as well.

Lakshmi Mishtan Bhandar, or LMB as it is more widely known in Jaipur, is a must-visit for foodies. My desire to order everything on the menu was quelled by my limitation of possessing just one stomach. Fortunately, it was big enough to ingest the most amazing Lassi I have ever had, Dahi Bhalla, Raj Kachori, Dal Bhati Churma, Paneer Pakora, Kadi Chawal, Samosa Kachori and Khandvi. (I think I’ve forgotten some of the other things we ordered.) I did have plenty of help from three other friends, of course.

Johari Bazaar is dotted by street vendors selling fruit and torans and decorative items of all kinds. And since we had gone pre-Diwali, there were even more people. 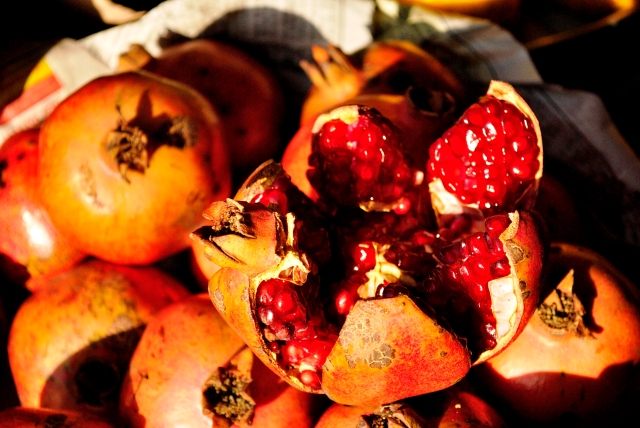 One of the many wares sold on the roadside. 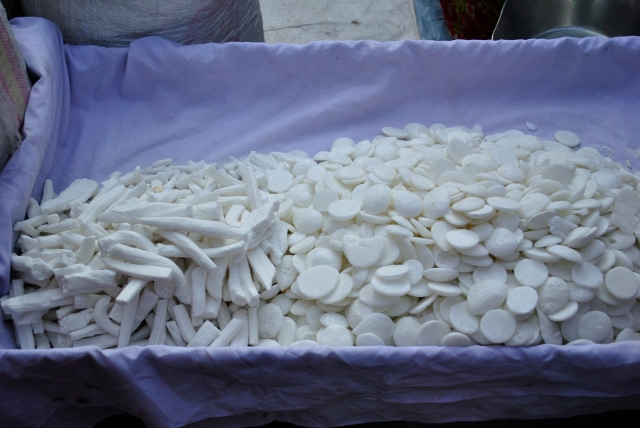 These little meringue-like sweet treats, what we call Bataashe (Singular Bataasha), are sold by kilos to people who use it as prasad.

The Hawa Mahal is a straight walk down from Johari Bazaar and right on the main road. That it was on the road killed the romance of the palace for me, but the facade is still quite beautiful.

To me, this shop seemed like a slice of the Moroccan markets I’ve seen on TV magically that magically appeared in Johari Bazaar. Cut-glass, coloured glass, mosaic, brass filigreed and patterned-glass lamps were everywhere. I went from one to the other, eyes glittering with the reflected light from within the lamps. 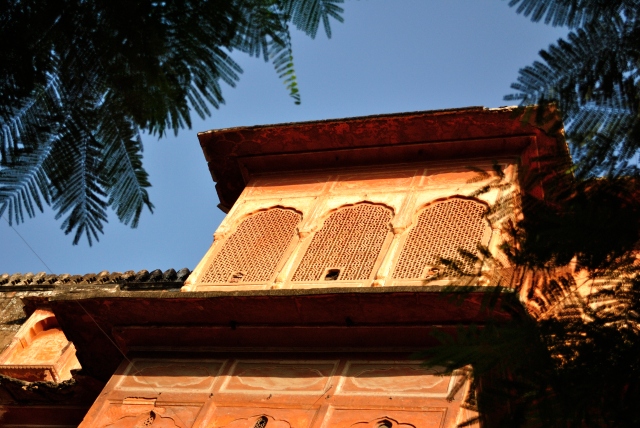 Almost every building in Jaipur is true to the design elements of the region. This one caught my eye because of the concrete meshes that double up as windows.

As we waited outside the gates of the City Museum, we saw it transform from a structure of shadows and green and blue lights into a welcoming, festive place lit with a number of diyas. 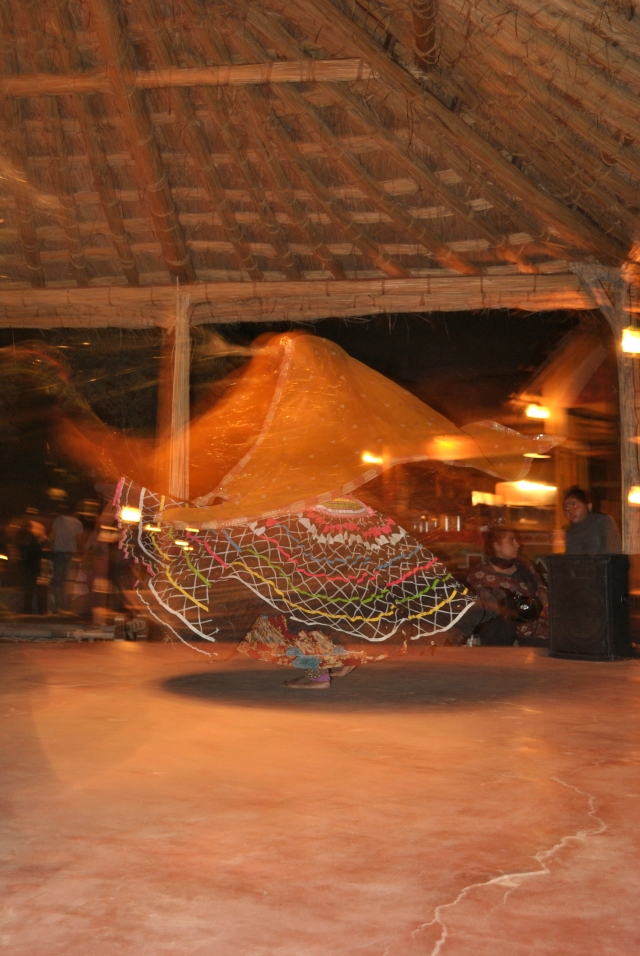 Chokhi Dhani is a massive dining property, a sort of private co-op effort where food is served the traditional way alongside performances by local artists. The food was delicious, but we couldn’t do justice to it because we had hogged our hearts out at LMB. That said, I helped myself to multiple Kesar Pista Kulfis – they were the best I have had to date.

Wares on display en route Amber Fort, which we didn’t end up seeing because we spent the day donating all our savings to the cause of shopping at Rajasthan Small Scale Cottage Industries. It’s a clever setup – with everything under one roof, they whisk you away from the clothes section to the jewellery and shoes and art sections one by one, smooth-talking you into exploring each and every part shop. Not a penny’s regret, but we comfortably ran up a bill of over a lakh between the four of us. My advice to you? Don’t make the mistake I did. Spend your days scouring the shops of Johari and Bapu Bazaar – you get great stuff for half the price. We didn’t have enough time for it, so cottage industries was best for us.

A view of Amber Fort from outside. We never got around to exploring it because we were busy donating all our savings. 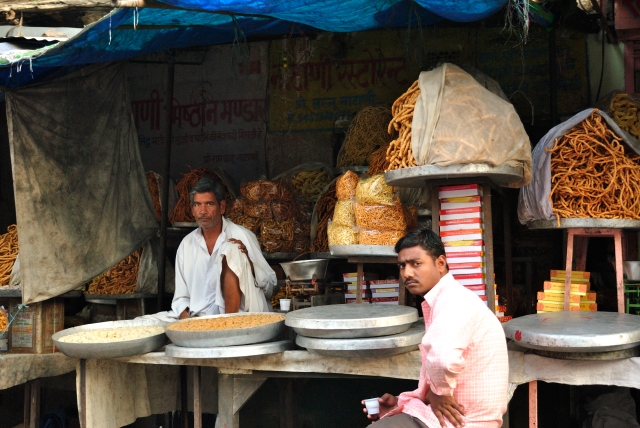 Endless trays of fried goodness beckoned from behind grumpy store owners as we drove past them, faces stuck to the windows, salivating profusely. We didn’t stop, though, because we were broke from having donated all our savings. (See a pattern emerging yet?)

Jal Mahal awaiting the start of Diwali celebrations, standing as still as the water it lives in, with cormorants resting on its domes as they take a break from hunting for fish.

And that’s how my two days in Jaipur went. I was like a horse with blinders, all my attention focused on shopping for friends, family and myself. That seems to have worked in my favour, though, because not having visited any of the architectural marvels this time gives me a good reason to go back there soon.

Getting there: Jaipur is accessible by road, train and air from Delhi. It’s accessible from most other places by air. If you’re going from Delhi, I would recommend taking a train – either overnight or early morning.

Go if: You love shopping, food, architecture, want to soak in the richness of culture and love a good sales pitch (the shopkeepers and their staff are very, very effective with their selling skills, I assure you).

Published by The Nebulous One

Wordsmith. Wanderer. Mother Nature's child. Novice photographer. Expert nothing. I write about my travels on www.adventuresofpotlibaba.wordpress.com. View all posts by The Nebulous One

11 thoughts on “The colours of Jaipur.”